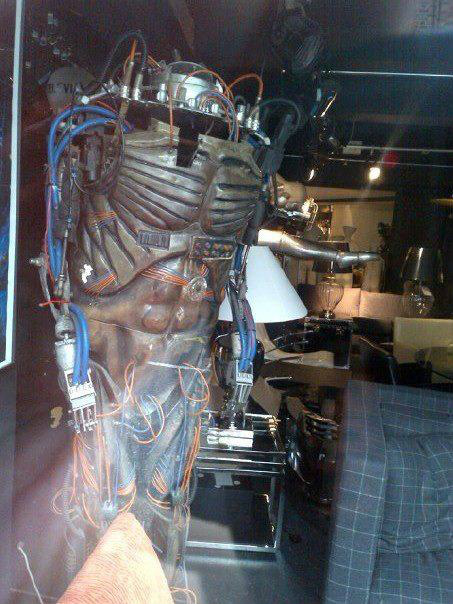 If the current owner of Hector is reading this, I’d love to have additional pictures of him in his current state on the site. So please do email me if you would like to get in contact. 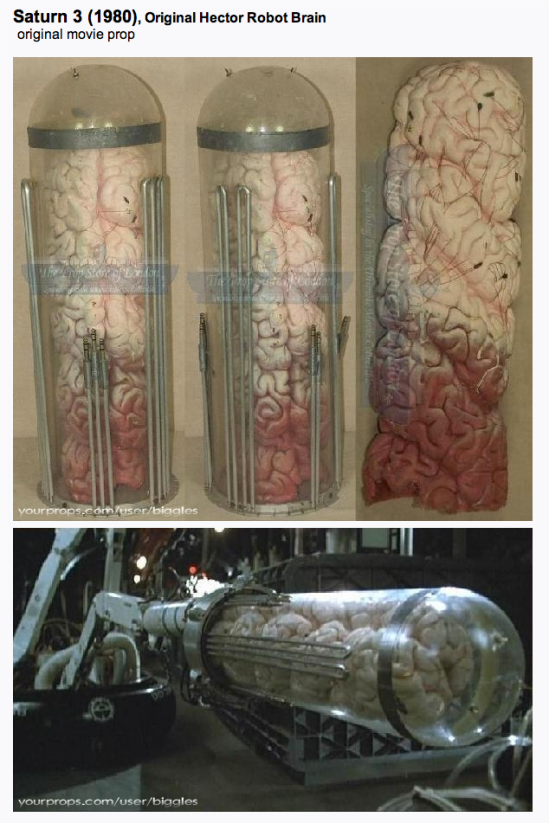 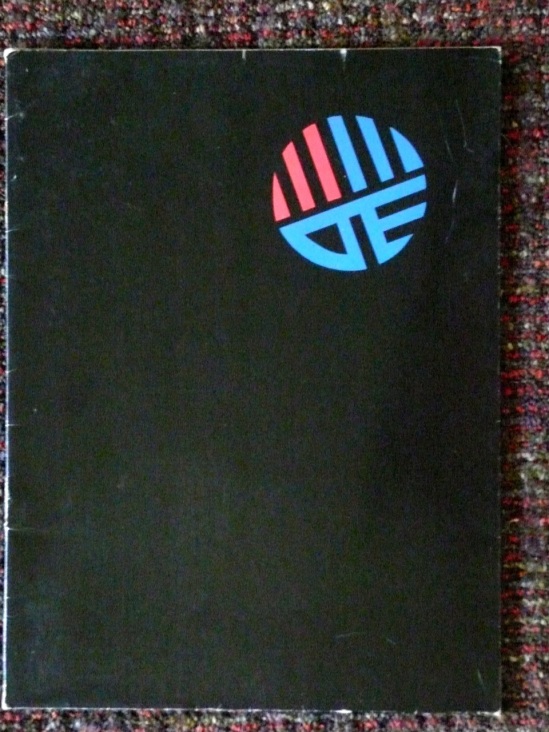 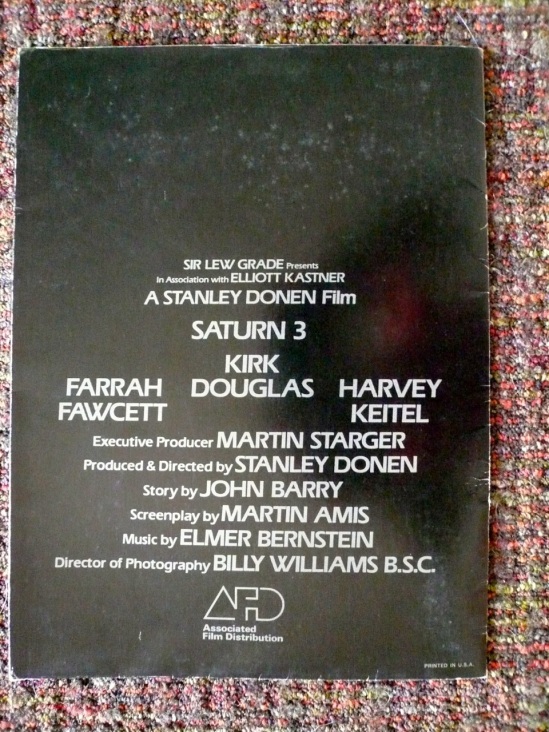 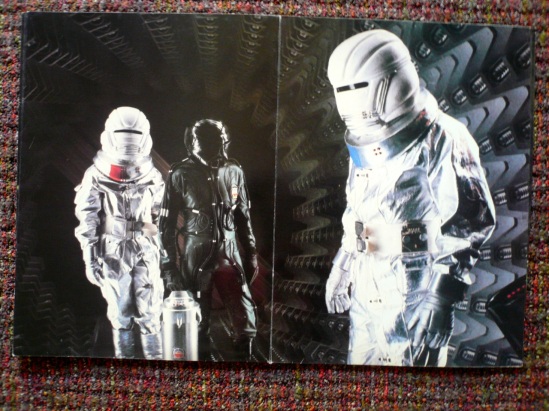 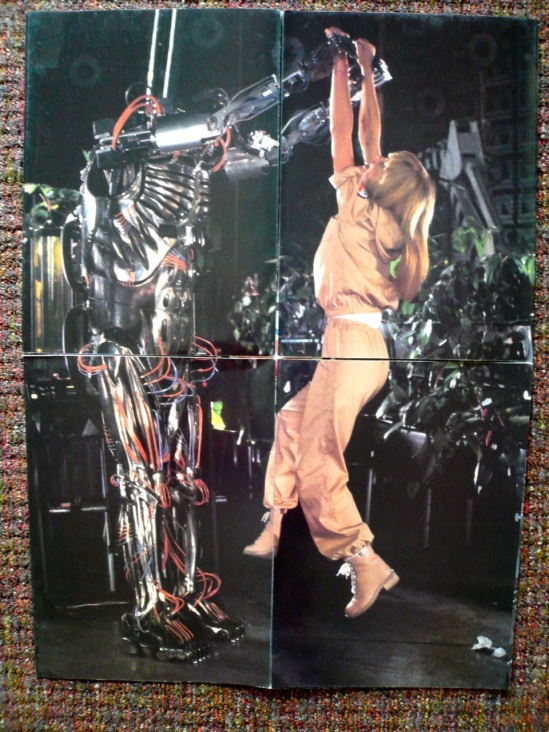 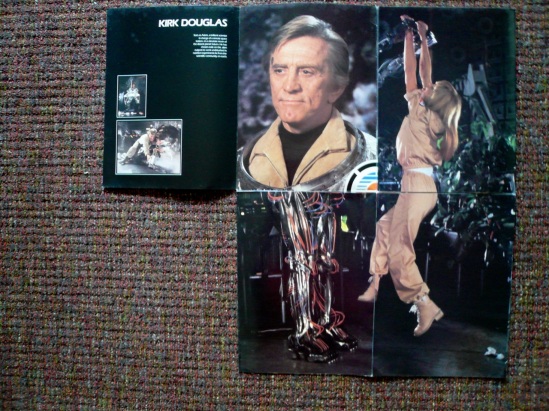 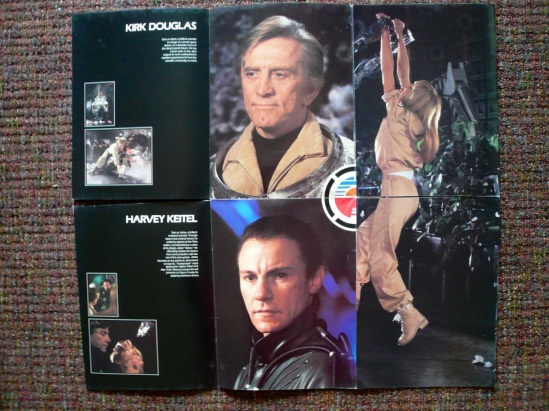 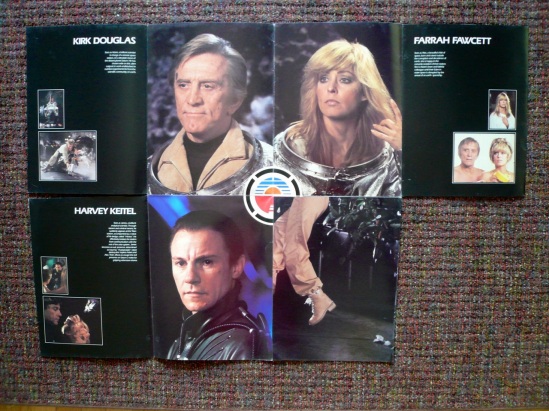 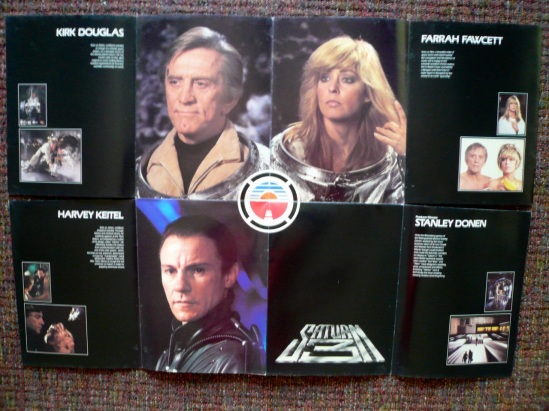 It is interesting to note that these portraits of Kirk and Farrah appear to have been the inspiration behind their likenesses on the Spanish release poster (see poster gallery page). 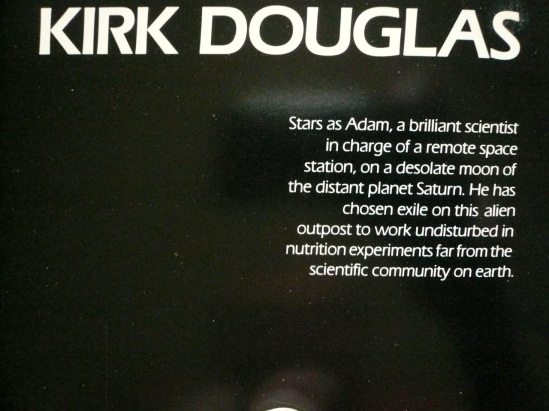 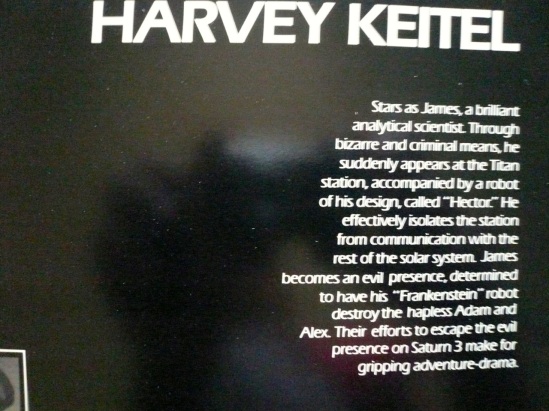 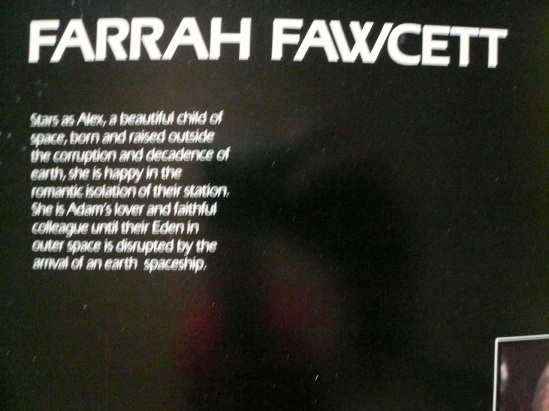 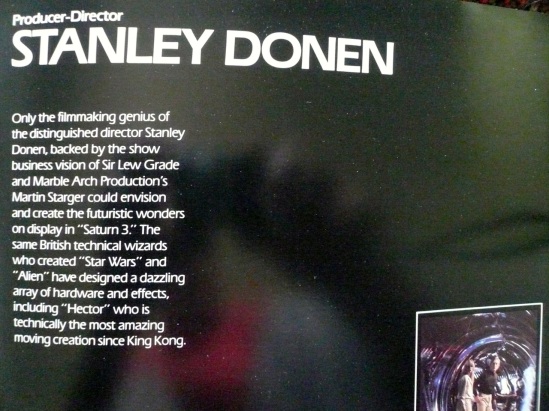 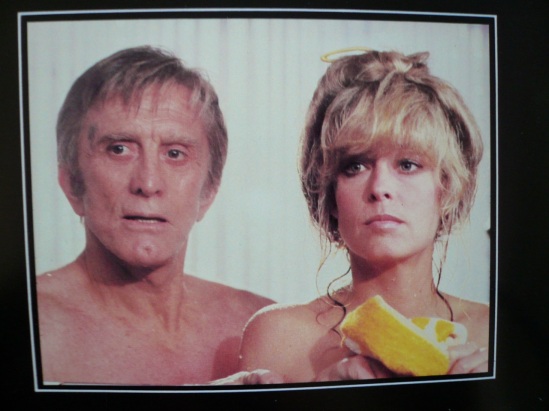 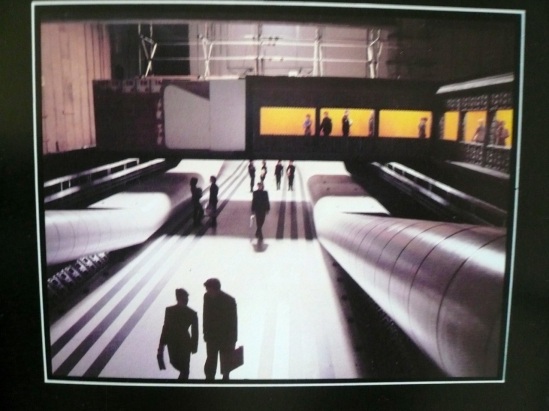 With many thanks to site contributer Bob Powers for supplying these images of the press kit which is part of his own personal collection of Saturn 3 memorabilia. 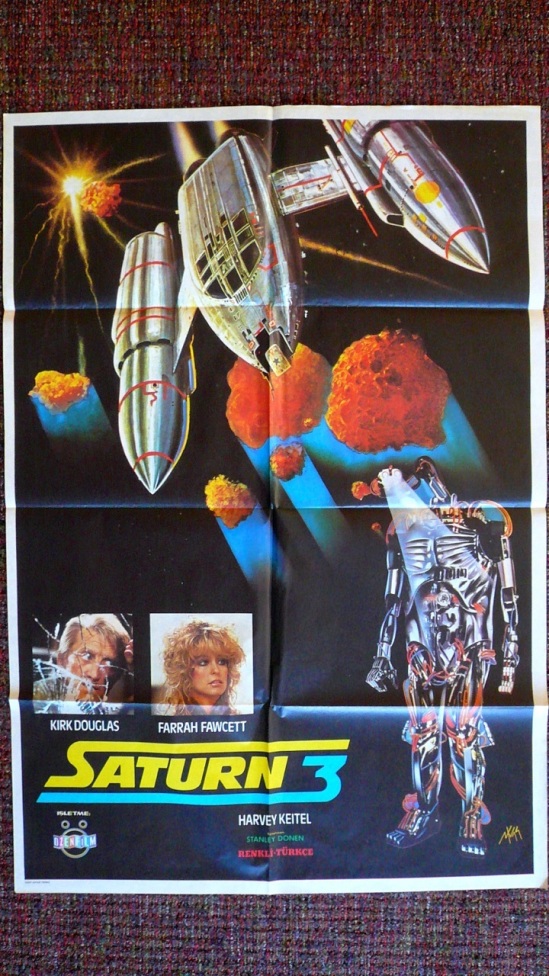 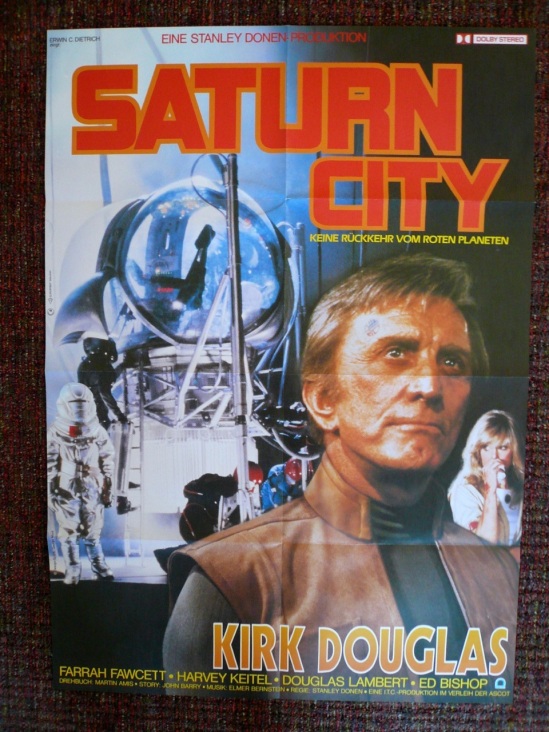 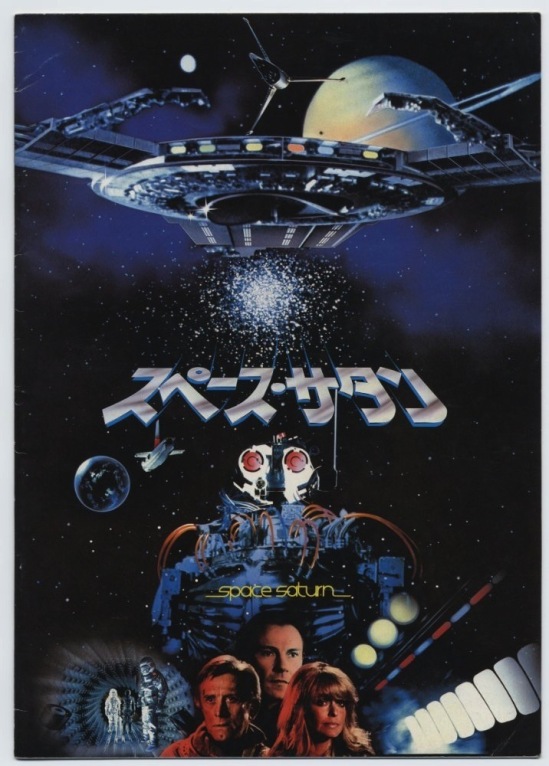 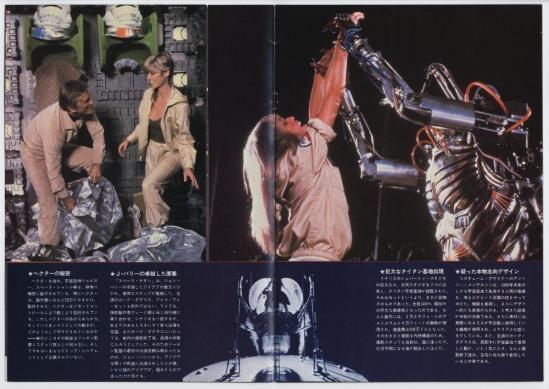 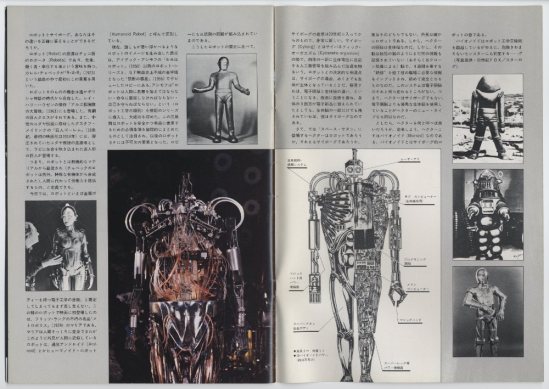 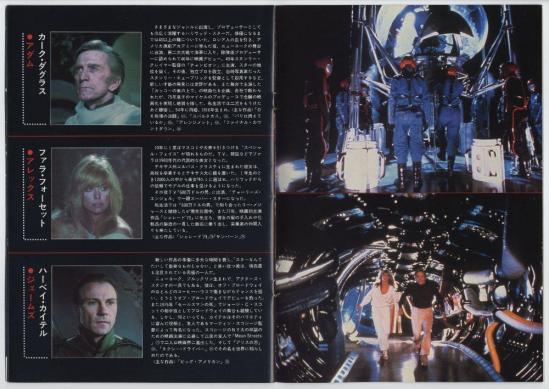 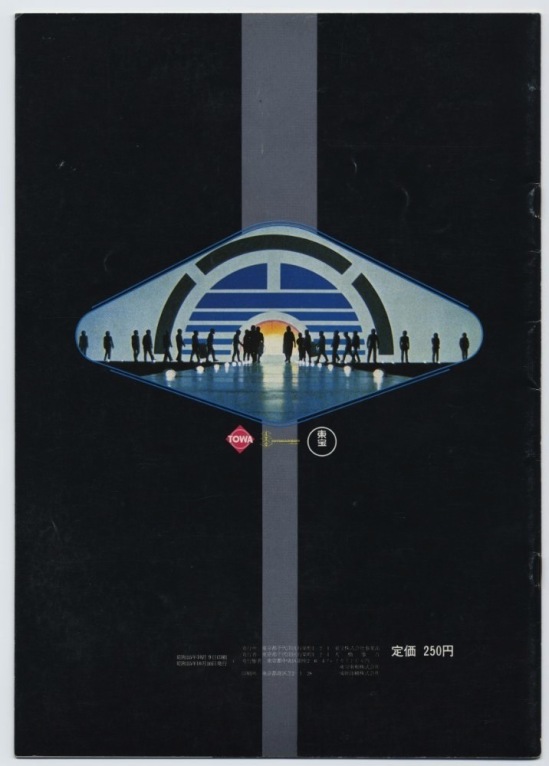 If there are any Japanese fans out there who would be happy to translate the program’s text into English for me, please feel free to drop me an email!

Another item from Bob Power’s personal collection: an iron-on patch given away at the first screenings of Saturn 3 in St. Louis, Missouri (and elsewhere) in 1980. Also included is the newspaper ad which promoted the iron-on giveaway. 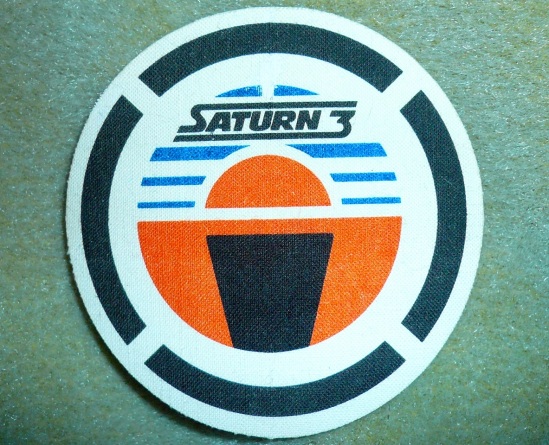 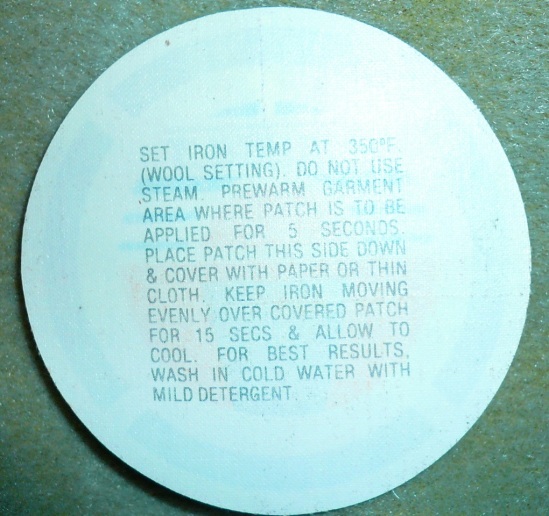 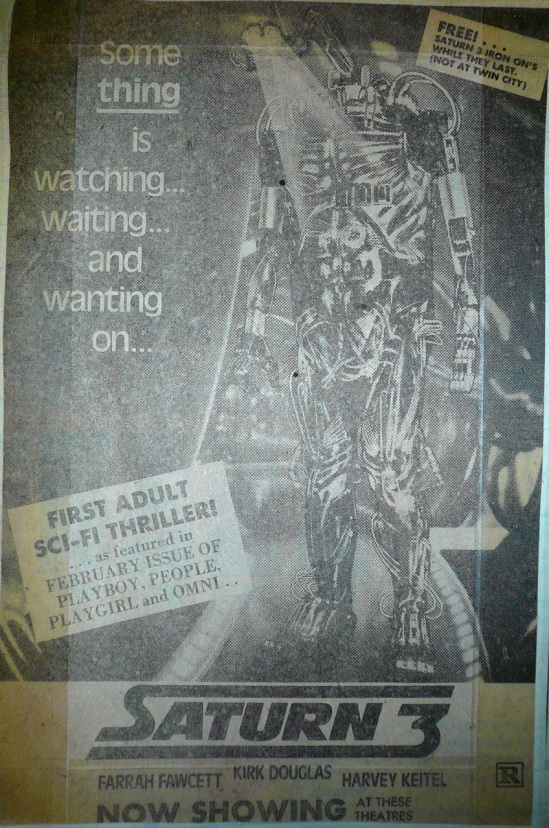 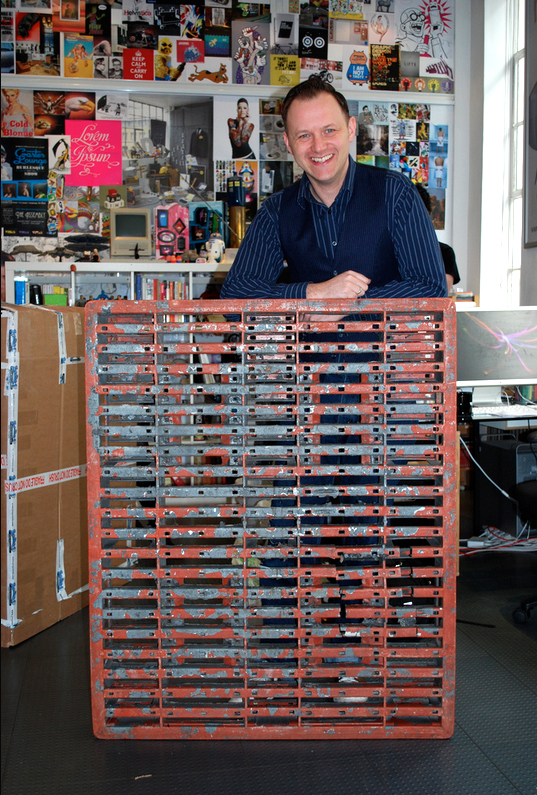 Eagle-eyed fans of sci-fi movies and TV series from the late 70’s through to the late 80’s may notice something familiar about the metal grates built into the flooring of the Saturn 3 Titan set. Produced in an injection molding company in Slough, England – these bright orange plastic lifting pallets (the kind of pallets used with fork-lift trucks) became a favored piece of set dressing amongst set builders in the UK. They have appeared in such iconic films as the original Star Wars, Alien, Outland, The Empire Strikes Back, Return Of The Jedi and Aliens – as well as TV episodes of Dr. Who, The Hitchiker’s Guide To The Galaxy and Red Dwarf. In 1978, 200 of these were purchased by Saturn 3 construction manager Ken Pattenden, painted grey and then incorporated into the main set.

They were favored by set dressers because they were relatively lightweight and sturdy enough to take heavy cameras and crew (there are plenty of examples where they have been used to make elevated walkways with little support). They were also fairly quiet to walk on (metalic footfalls were added via foley to the soundtrack in post when the cast members were walking around the set).

As they had been first used in the original Star Wars (most notably as part of the Death Star detention center and also the Millennium Falcon interior) – they came to be known fondly in the business as ‘The Star Wars Panels’. 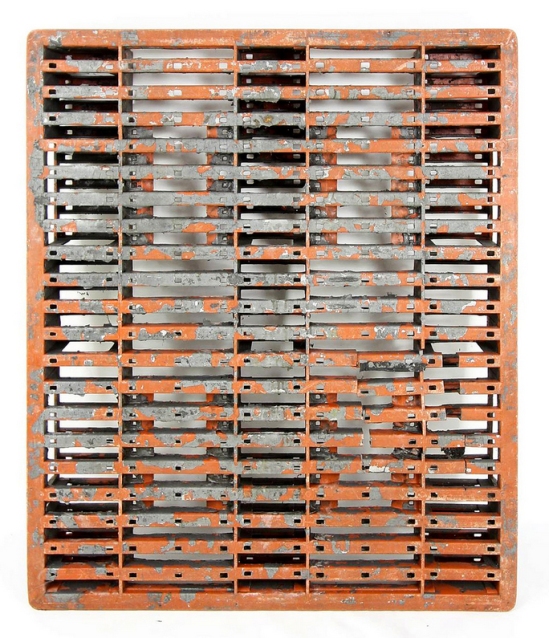 Movie fan and avid prop collector, Craig Spivey, was given one of these ‘Star Wars Panels’ a couple of years ago and began researching them – spotting them in movie after movie – including of course Saturn 3.

A gorgeous series of screen shots demonstrating the use of the panels in Saturn 3 can be found on Craig’s site here: 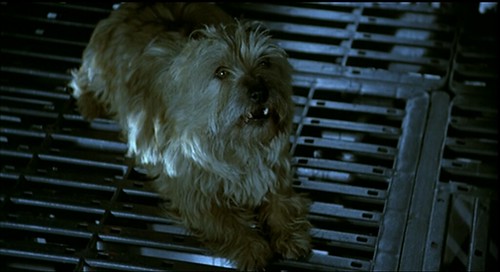 In 2012, Craig met Alan Tomkins, the Art Director on Star Wars and Peter Lamont, the Production Designer on Aliens – at a memorabilia show and they both instantly recognised the panels. As Craig explains:

“We had a short discussion during which Peter told me that they would get duff batches and unwanted stock for cheap. I also asked them about how well the paint stuck to them as mine is very flaky. Alan confirmed that no matter how well they primed them, the paint would flake off with all the traffic. You can really see this in Empire and Aliens, where the orange plastic shows through and gives the panels a rusted look.”

Craig’s particular panel was purchased from a prop hire company in London and was part of a batch of 10 remaining pallets. Craig again, “It makes sense that a production would hire something so generic as this in when it needed it. They’d be bulky for a studio to store on site and hard to break down and scrap like wooden sets.” Craig’s working theory is that the same batch could have feasibly ended up with a hire company and they travelled around Elstree, Pinewood, Shepperton and the BBC TV Centre being repainted and repurposed as they were needed. “More than anything, it’s just fun to think that might have been the case.”

For more information on this fascinating piece of movie history, a link to Craig’s informative and well-researched site can be found here: